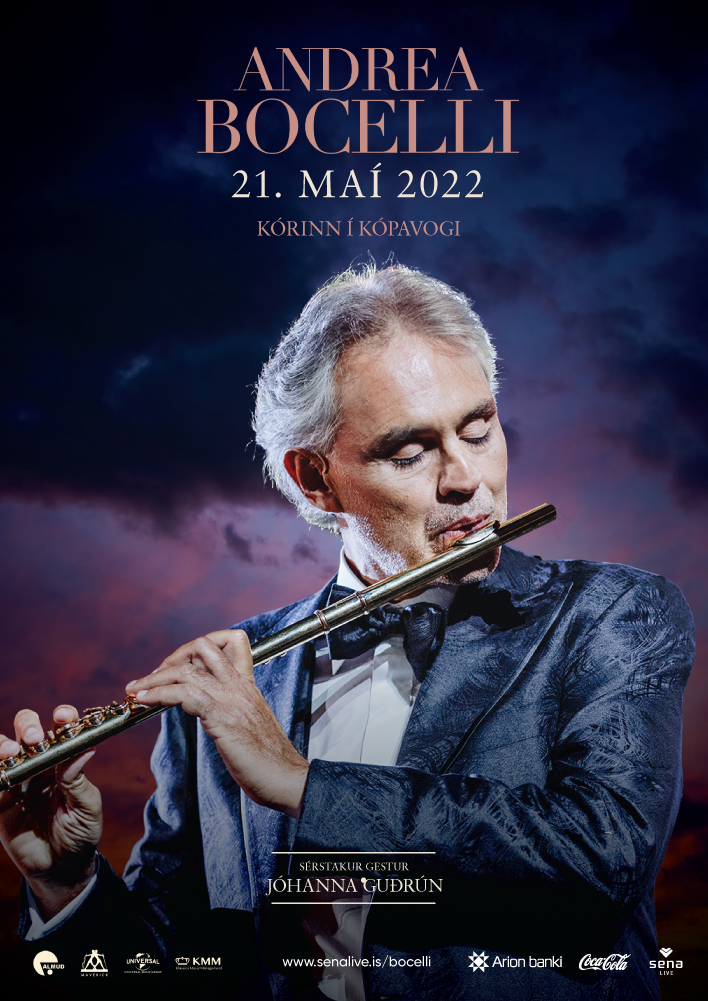 The Italian singer and one of the world’s most beloved tenor Andrea Bocelli will come to Iceland Saturday May 21st 2022 and hold a world class concert in Kórinn. Bocelli is known for having one of the most beautiful voices in the world and has sold over 90 million records globally. He played a big part in bringing classical music into the present and his songs have topped pop charts all over the world. Celine Dion has said, “If God would have a singing voice, He would sound a lot like Andrea Bocelli.”

Kórinn in Kópavogur will be transformed into a seated venue, only numbered seats will be available. Bocelli will perform with SonfinaNord a 70 person orchestra, a choir from Fílharmónía and special guests. This will be the largest seated concert in Icelandic history, but still more intimate than many of his concerts abroad.

The concert will have two parts; the first halve will focus on classical songs where he’ll perform all the most known operatic arias and the second part will feature all of his most popular hits.

Bocellli was born on September 22, 1958 on his family’s farm in Lajatico, amongst the vineyards of the Pisan countryside. He showed music great interest from a very early age playing piano from the age of six, and later flute, saxophone and other instruments. Finally Andrea found his voice, his ideal instrument. He continued singing throughout his studies in Pisa and finished a law degree.

In 1994 Bocelli made his debut on the operatic stage in Verdi’s Macbeth and by that Christmas he was invited to sing before the Pope. In 1996 the song Con te Partirò (and it’s later arrangement as a duet with Sarah Brightman entitled Time to Say Goodbye) was heard in every corner of the world. He later released the album Romanza and broke all records. Bocelli’s career skyrocketed and hasn’t stopped since.

Andrea Bocelli has a successful career spanning a quarter of a century with 6 Grammy Awards, 6 Latin Grammy Award nominations, a Golden Globe win and Oscar nomination, millions of records sold, world tours and a star in the Hollywood Walk of Fame. He has always been committed to spreading messages of positivity, hope and perseverance around the world. His music has touched the hearts and minds of people all over the world, and as a powerful social advocate, he has become the voice that gives a voice to the world.