A recap of Sinfonianord´s biggest recording year to date 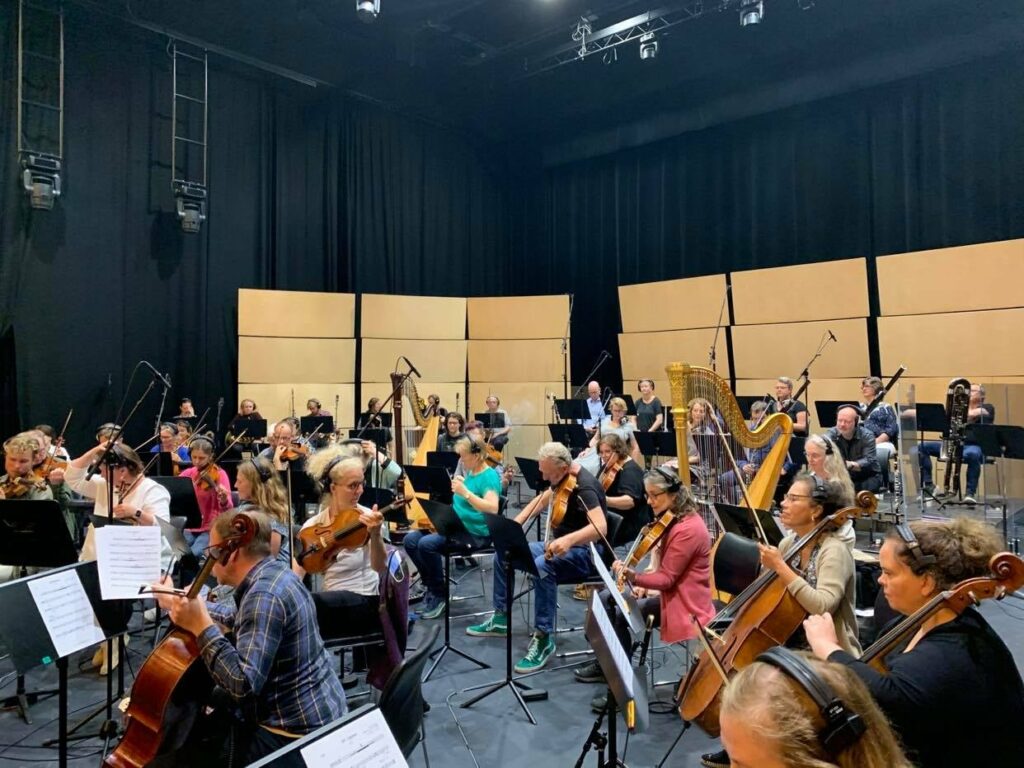 We are very proud to be able to say that 2021 was our biggest year yet in regards to international recordings for various projects. The pandemic made regular concerts almost impossible but instead the orchestra was busy recording music for companies like Netflix, Disney and Sony.

Below is a summary of some of the projects we did in 2021.

in February, Atli Örvarsson recorded music to the children´s tv series Treasure Treckers as well as the score to the Icelandic/Polish movie Wolka.

Þorvaldur Bjarni Þorvaldsson also recorded the music for the Icelandic musical Benedikt Búálfur which was premiered in Akureyri in March.

That same month, Þórður Magnússon´s score to “Sons of the Soil” was recorded in Hof and the American star composer, Bear McCreary recorded two Icelandic choirs (Schola Cantorum and Hymnodia) for the video game “God of War.”

Herdís Stefánsdóttir also came and recorded the choir Hymnodia for a new Icelandic TV series called “Blackport” and for a new movie by Disney´s Y, called “The last man.”

April was a busy month for the orchestra with projects for world renown artists like Khalid, Sage Lewis and Alex Sommers.

In May, Veigar Margeirsson arrived in Akureyri with a brand new score to the American movie” High Expectations” and Atli Örvarsson recorded music for his company “Interia.”

One of the Orchestra´s biggest projects yet was recorded in July in Hof, Akureyri.

Disney World celebrated their 50th anniversary with what they call “Disney Enchantment” and hired Sinfonianord to record some of the music for the new firework show at The Magic Kingdom. Disney executives travelled all the way to the North of Iceland to work with the orchestra and in a two day session they completed the task of recording some of Disney´s most iconic tunes.

In August the orchestra recorded Atli Örvarsson´s score for a new documentary about Trump by The Discovery Channel and more music for Sony´s video game “God of War.”

Ilan Eshkeri and Steve McLaughlin returned in September and recorded for the movie “Canyon Del Muerto” and the famous video game “Sims.”

That same month, live concerts finally returned after months of restrictions due to the pandemic.

The Icelandic singer Jónas Sig started our year with a bang with a sold out concert in Hof with the orchestra.

In October the orchestra was finally able to do a concert that had been postponed a number of times because of Covid. The orchestra performed Hildur Guðnadóttir´s Oscars´ award winning score to the movie Joker at Eldborg, Harpa. Her father, Guðni Franzson conducted and the movie was displayed on a big screen during the concert. A truly emotional concert to a sold out audience.

Then in  November, SinfoniaNord and The Icelandic Opera joined forces for the first time in Verdi´s iconic opera, La Traviata. The premiere was held on November 6th in Eldborg, Harpa and then moved to the North of Iceland to Hof, Akureyri where the last two shows were held. One of Iceland´s rising opera stars, Herdís Anna Jónasdóttir sang the role of Violetta and the role of Alfredo was sung by Rocco Rupolo. The orchestra and the cast were in the safe hands of conductor Anna-Maria Helsing who currently serves as the Principal Guest Conductor of The BBC Concert Orchestra.